It has been long assumed that the gold standard in diagnosing low back pain and disc injuries has been through MRI. Though not doubting this in serious injuries; many studies have now revealed that this may not be the case and that many asymptomatic people have “degenerative” findings on imaging even though they are completely pain free.

A recent study undertaken in 2009 saw that 48% of young people aged 20-22 had degenerative findings on imaging and 25% had a “disc bulge” and majority of these correlated with pain free individuals.

This has lead to further studies currently being undertaken at Macquarie University investigating if there is a distinct change on imaging of the discs over a period of time with recovery. This will be published shortly.

And it is not just limited to low back imaging. Studies are also investigating other areas such as knee pain and degenerative changes occurring in knees joints and whether these have an effect on pain. It is quoted as to 85% of adults that undergo x-rays of the knee show degenerative change or arthritis without any associated pain. One such study in 2005 concluded in showing 48% of professional basketball players had cartilage damage to their knees without any hint of being in pain.

The underlying message should be that MRI’s and medical imaging are a great tool to identify serious conditions but an aspect of conservative management should be sought on a case by case basis. There is certainly an aspect of over catastrophising a situation or degenerative findings which can be normal and the language used to describe these can often increase fear and even drive the pain.

At the end of the day, don’t be a Victim Of Medical Imaging Technolgy (VOMIT). Pain is more than just an image, treat the person not just the image. 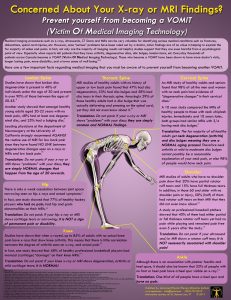