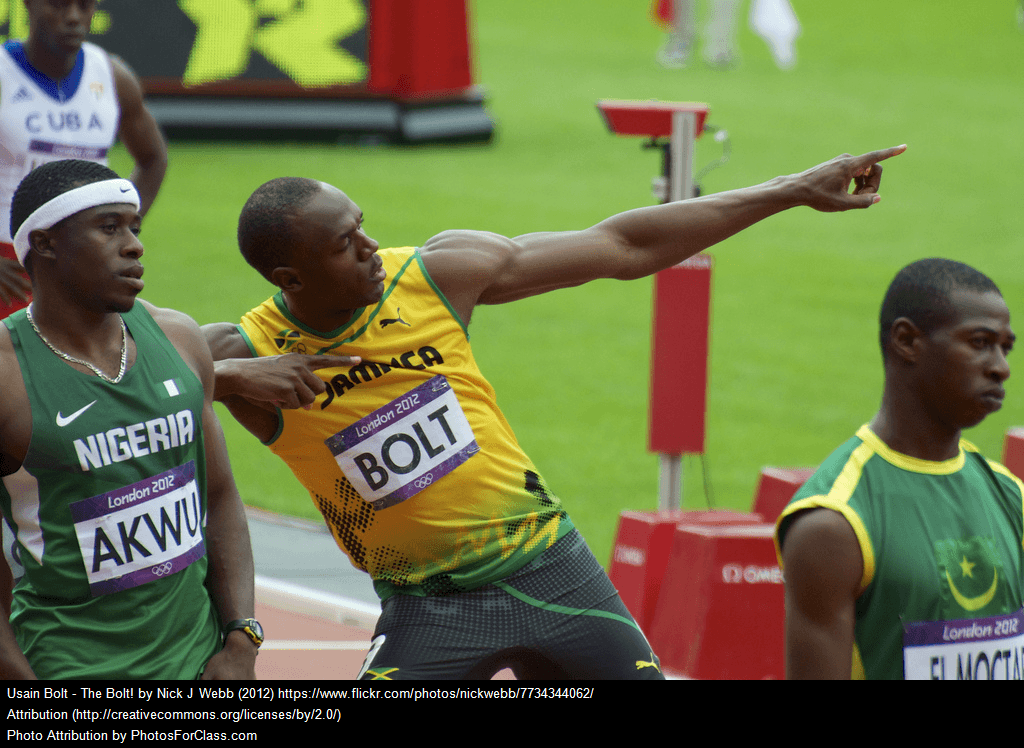 Could Usain be Faster??

With all the hype surrounding Usain Bolt’s seemingly effortless victories at Rio we thought this might be a good opportunity to talk about why rules don’t work when it comes to people and movement. The point here is that individuals vary enough from one person to the next that there is no single set of of firm universal rules of form. There are commonalities, but we need to take each person in context.

Have you watched a freeze frame of Bolt leaving the blocks? In the drive phase Bolt’s femur is internally rotated as he pulls through the swing phase, his foot makes contact outside the line of his shoulders, and his body leans laterally to counterbalance. For reference, the femur is the long bone located within the human thigh. This has drawn quite a bit of attention and speculation as to how much faster Bolt could be if he tidied up his starts.

Youtube has a lot of videos of Bolt. Here’s one from the Olymipcs if you care to watch.

But what if this is ideal to him?

Bolt is a staggering 195cm (6 foot 5 inches), the kind of height that is deemed detrimental in the shorter forms of track due to the difficulties encountered when leaving the starting blocks. The 100m sprint is a particularly interesting event as it is almost a 50/50 split of acceleration and top speed endurance. Typically it is around the 60 metre mark that top speed is achieved and it’s Bolt’s unique combination of stride length and leg speed that allows him to dominate the closing stages of the race where these attributes are vital .

However, this trait that makes Bolt so unbelievable in the last 40 metres of a race is the thing that hinders him the most in the first 60 metres.

Can you have your cake and eat it too?

So how is it that he can overcome his limitations to the point where he is often capable of being with the rest of the field at the 30 metre mark whilst being considered “incorrect”.

There are certain angles created by the limbs in the drive phase that are considered “ideal” for sprint mechanics. If we try to apply those angles to each individual athlete with differing shin lengths, thigh lengths, torso lengths, and range of motion discrepancies, can you see how others would have to do things differently to come up with a similar result? Bolt is trying to match his centre of mass height and shin angle with someone like Justin Gatlin who is 10cm (four inches) shorter than him.

So how does he do this?

Usain rotates his thigh inwards which will swing his foot out to clear the ground while in the drive phase. This allows him to have a low centre of mass and a shin angle that creates horizontal propulsion. There are some who say that Bolt’s side to side movement could be improved to create greater linear propulsion, however, let’s say you try and coach Bolt out of this because internal rotation isn’t ideal. As a result of this “correction” he is now upright straight away, forcing his shin angle to be larger and therefore he can no longer get the horizontal force production he needs to accelerate.

A further argument that could be mounted to support the internal rotation of the femur prior to contact is that it places the gluteus maximus in a lengthened position prior to contraction. The gluteus maximus muscle is located in the buttocks and is regarded as one of the strongest muscles in the human body.

There is some positive evidence supporting the elastic recoil properties of the musculo-tendon complex when a muscle is maximally lengthened prior to contraction[1]. In this case the negative work phase would be the internal rotation of the limb during swing phase, while the positive work phase would be the utilisation of the stored energy in the contraction of the gluteus maximus resulting in hip extension. This may aid Bolt in creating higher ground reaction force through the horizontal vector during the initial stages of the drive phase.

The results of Usain moving ‘incorrectly’ seem to speak for themselves.

Note that this is an application of biomechanics knowledge to a particular case. We have not spent time in a lab testing Usain and therefore this article can be considered educated speculation!

The take home point is that there is not just one correct way to move, movement is specific to your particular attributes and deficiencies.

You deserve to be considered and assessed as the individual you are, whether that be on the treatment table or in the gym.